Genealogists are familiar with the problems that come with the Smith and Jones surnames. They have different types of origins, but are similar in the problem of overabundance of unrelated families.

Smith is an occupational surname, so many men who were blacksmiths chose Smith for their last name, or had it chosen for them by the record keepers.

Jones originated with the first name John. When it was dictated by the King of England that the Welsh choose surnames, many of them used forms of their fathers’ first name. For example, if their father was named Richard, they chose Ap Richard, meaning “son of Richard,” which later became Pritchard. Other surnames came in a similar manner, such as Powell and Price. Many people had a father named John. Most of those got the surname Jones. So you can see how we came to have so many unrelated Jones families.

You can have two Smith neighbors who have no kinship whatsoever. I saw this firsthand when I was growing up, as there were neighboring Smith households down the road who, as far as they knew, were not related at all.

Over 40 years ago, I came upon this problem in my own ancestry. My great-grandmother was Lucretia Jones. Her parents, according to her death certificate, were Wiley Jones and Nancy Smith. So I had both problem surnames in one family. I have only recently been able to get anywhere with them.

There are many genealogies online now for Wiley Jones. They almost all say that he was born July 22, 1819 in Craven Co., NC and died December 12, 1897 in Pitt Co., NC. They also say that he married Marina Smith or Marina Ange and had about six children. My own genealogy says that Wiley Jones married Nancy Smith. There are also many genealogies online which say that Nancy Smith was married to Redding L. Jones.

There are contradictions and inconsistencies in the genealogies when compared with the available records. I have studied these and have come to the conclusion that most of the online genealogies are incorrect.

The first fact to note is that my great-grandmother, Lucretia Jones, was born April 14, 1857, to Wiley Jones and Nancy Smith. A supporting fact is that Wiley Jones (shown as Willie Jones) is in the 1850 Census for Pitt Co., NC with a wife named Nancy. They have one child, Laney, who is 8 months old. This means that Wiley probably married Nancy around 1848. As Lucretia was born in 1857, Wiley was still married to Nancy at least until then.

The 1860 Census for Pitt Co., NC shows “Wilie Jones” and wife, “Mariny,” with three children, Selina (age 6), W. A. (a boy, age 5), and S. A. (a girl, age 2). Later records show that the last two children were William Augustus Jones and Sophia A. Jones. All of the online genealogies say that Marina is the mother of those three children. If Wiley was still married to Nancy in 1857, the first two children obviously would have to be hers, not Marina’s. Further confirmation of this came when I found the marriage record of Selina. On that record, she states that her mother was Nancy.

Another question is about the Nancy Smith who married Redding L. Jones. When you look at the 1850 Census for Pitt Co., NC, you see Wiley Jones and his wife, Nancy (who we know was a Smith). In the preceding household in the Census, you see Willie Smith and his daughter, another Nancy Smith, who happens to be same age as Redding’s wife as shown in the 1860 Census. So there were two Nancy Smiths.

Here is the marriage entry for Redding L. Jones and Nancy Smith:

So here is what I conclude about Wiley Jones, his wives, and their children. 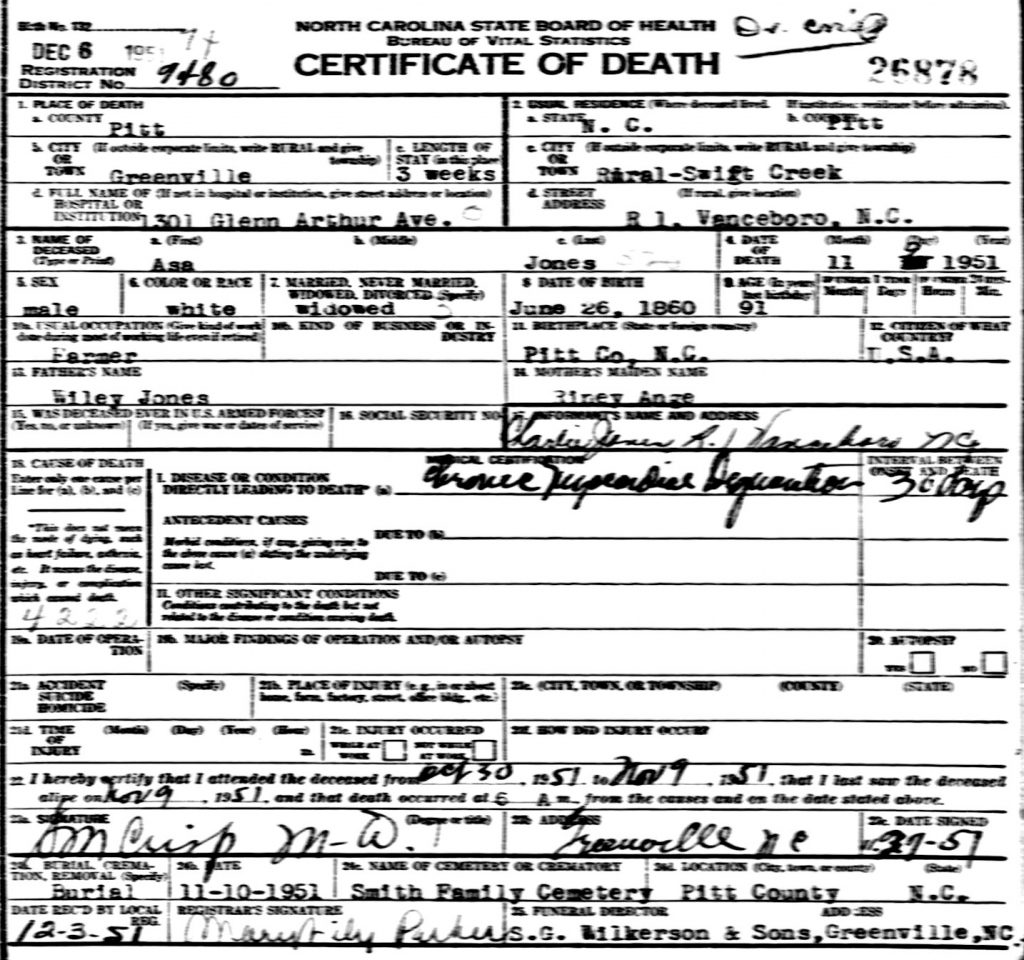 A chart of Wiley’s descendants is here.

I have also found Wiley’s supposed ancestry. I had started adding it to my data, but I have stopped because there are too many problems with all of the online genealogies. I will write more about Wiley’s family when I find more data and can figure out the truth.