I have been collecting magazines for many years now, both in hard copies and computer files I have found online. I was looking through my computer files and found a magazine called “Blade and Ledger,” dated May 1929. It was published in Chicago, IL.

While scanning through the page images, I noticed an article titled “Breaking Into Pictures” by Madge Bellamy. I had never heard of her, so I found an article on Wikipedia about her. It turns out that Madge Bellamy was a stage name, and her real name was Margaret Derden Philpott. I have some Philpott ancestry, so I began tracing her ancestry.

I found that Madge’s Philpott ancestry goes back to Edward Philpott and Susanna Posey of Charles County, MD, as does mine. Here is a chart which shows that relationship: 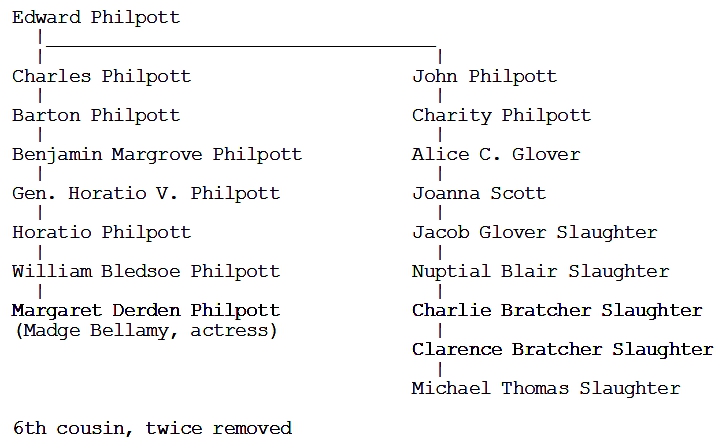 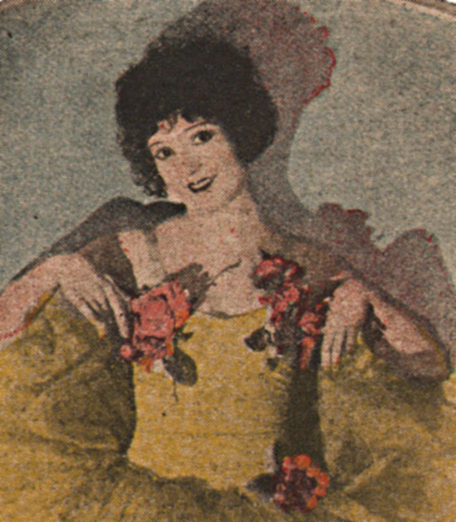 “Breaking into pictures” is not an easy thing to do. For one who has had no experience before the camera, or who has not had stage training, it is a long, long up-hill and tortuous trail that leads even to the first important step up the ladder toward distinction . . . and “screen credit.”

Even with screen experience and stage training it is often a very difficult thing to see a casting director for an interview, not to mention being cast for a part.

Patience is a necessary quality if one is seeking a screen career . . . patience and plenty of pluck, together with courage, a willingness to co-operate with one’s fellow-players and directors, and, of course, above all, an overwhelming urge to become an actress, because you have faith in your own dramatic ability. One must have health, too; do not overlook that fact, for it is most important.

So many people ask me: “How shall I go about it to break into the movies?” I mention the above requisites, as they come to mind, and feel that they are among the most important; also that one should have a natural urge to express herself through acting before she decides upon such a career. In other words, just because Jenny Jones has announced her intention to become an actress is no reason why Susie Smith and Betty Brown, also, should embark upon similar careers.

Once having decided to become a screen actress, the girl who does so, must make up her mind that she is lining herself up with just about the hardest work any career for women involves. Do not ever think screen actresses tread a pathway of roses. Rather it is a path beset with thorns, taking into consideration the grief, the disappointments and the heartaches that have gone hand in hand with practically ever great actress’ trail to stardom.

My own career on the screen has been somewhat out of the ordinary, due to the fact that I was a stage child and grew up in the atmosphere of the theater. But I have had my struggles, too, and my heartaches. We all do.

I was born in Hillsboro, Texas, in the home of my maternal grandparents. My father was, at that time, professor of English in the University of Texas. The first five years of my life I lived in San Antonio and for the next five at Brownwood to be with father. After that, father, mother and I moved to Denver Colo., where father became a newspaper editor. Meanwhile I had been studying dancing and made my debut as a dancer at Elitch’s Gardens, where many seasoned troupers spent their “breaking in” period for future stage triumphs.

All during my childhood I “played show,” rode horses and read books, under father’s guidance. I took part in countless school and Sunday school entertainments, charity shows and bazaar programs. Wherever there was anything “theatrical” going on in the neighborhood I was right there, eager to do my part. Always, I had the dramatic urge. Always, I wanted to be an actress. However, I did not give voice to that urge, even when taking part in the various entertainments, until I definitely decided at the age of fourteen that I would never be happy until I was a professional actress.

Fortunately, for me, my parents approved my decision and to further my ambition we moved to New York. We did not know any one in New York through whom I might gain an audience with any of the big Broadway producers. So, while father did his newspaper work, mother and I set out to find what we called the “starting point” of my career.

Having had the bit of professional experience with my dancing and dance phantisies in Denver, we were not entirely “tenderfeet,” although I must say we were a couple of “innocents in Broadway.” We knew there was but one place in that maze of the theatrical world where we might possibly find, at least, the back door of the musical comedy world to which I then aspired. That was “Tin Pan Alley” . . . where songs and voices are tried out.

We “crashed in” at a half-open door and watched and listened while a chorus was being selected for a Broadway show. I was determined to have a try-out, for I felt I could measure up to the demands and, eventually, they actually did give me an opportunity to dance a bit and sing a bit and told me to come to the first rehearsal. What a great moment for me! And mother, too! I was just thirteen years old . . . and I had actually been called for rehearsal with a Broadway chorus!

The production was tried out in New Haven, Conn., and Daniel Frohman came on from New York to witness the performance. It was a day that was to mark another step forward for me. For some reason, never explained, I attracted his attention. Later on when the show played Broadway he became interested in my work and when the season was over he cast me for a small part in another Frohman production and changed my name from Margaret Philpott to the stage name which I have always used, Madge Bellamy. Incidentally, during those days under the Frohman banner, a friendship was formed that has endured through the years, ever a source of inspiration because of the faith the Frohmans always have had in me.

Emerson says, in effect, that one of our chief wants in life is someone who has faith in us to assist in bringing out the best in us. And I believe that is true.

It was during the first year of my work on the professional stage that I was given an opportunity to play Juliet — at the age of fourteen — which, as you remember, is the very age of Shakespeare’s immortal heroine herself. It all happened like this:

Marie Wainwright was the star of the production in which I was playing a bit. Miss wainwright was one of the noted Juliets of the American stage in her younger years and as the company had been asked to give a benefit performance, it was suggested that “Romeo and Juliet” be revived as a compliment to our star.

Under my father’s teaching I had studied Shakespeare and knew Juliet’s lines perfectly. Unbeknown to the company — as I thought — I watched the rehearsals with much interest, when through the business of the role in the wings and had a great time, all to myself — I thought. In the evening at home I went through the voice inflections of the lines, imitating Miss Wainwright. Some one found me out and told Miss Wainwright. She watched me more carefully as I played my bit part in our regular production and when they rehearsed “Romeo and Juliet” she slyly watched me doing my own “rehearsal” in the wings.

The day of the dress rehearsal arrived. I shall never forget it. Miss Wainwright came to me and asked me if I would like to play Juliet. To say I was thrilled is putting it mildly. I was simply overcome with joy and excitement. Then there followed explanations of the sudden honor thrust upon me, but I did not yet know that I was to play the role at the regular performance. I still believed I was merely to play the role at the rehearsal.

The rehearsal over with, the lights of the house were snapped on. The audience, which I had thought was composed merely of friends of the company, was literally made up on dramatic critics from New York and Boston papers. They were most generous in their approval, both personally and in their columns. The next afternoon I played the role at the benefit performance.

I have tried many times to fathom why Miss Wainwright was so desirous to have me play Juliet. I think, perhaps, it was because Miss Wainwriht, herself, was launched on a successful career through her portrayal of the same character at a benefit when George Rignold, an eminent Australian Shakesperean actor, of the day, played Romeo to six Juliets. At any rate, while my performance did not make a Shakesperean actress of me, it provided me with a splendid stepping-stone to a better place on the spoken stage.

During all this time I was studying my school lessons with father as tutor. I studied voice culture and I kept up my practice at singing and dancing. I worked hard, urged on by ambition and the great dramatic urge within me.

Then came my part in “Dear Brutus,” with William Gillette, and then I was cast for the role of “Pollyanna” in the play by the same name. I played Pollyanna for months on end. I toured the entire country in the part. I became so identified with the part and the character that even to this day many people think of me in terms of “Pollyanna” . . . in spite of “Sandy,” “Ankles Preferred,” “Summer Bachelors,” “Mother Knows Best” and all the may other screen productions in which I have appeared.

It was during the run of “Pollyanna” that the late Thomas Ince first asked me to take a screen test. My first picture was “The Riddle Woman,” starring Geraldine Farrar. I had a small part. Incidentally, it also marked Phillipe De Lacy’s first screen appearance. He was three years of age at the time.

Then I came to Hollywood — or rather, to Culver City, to the Ince Studios where my first picture was “Hail, the Woman.” After the death of Mr. Ince I went under contract to the Fox Film Corporation and it is under this banner that my best screen work has been done. Of all my roles I like that of Sally Quaile in “Mother Knows Best” better than any of the others. Many of my friends like “Sandy” the best as it marked a milestone in my career. At last, I had left the Pollyanniah [sic] type behind me. They liked Sandy — lovable, but misunderstood. But I prefer Sally — there seems to be something of me in Sally — especially in those one-night stand sequences showing the cheerless dressing-rooms — and the snow. Mother and I, however, never had to pawn anything to get back to New York — like Sally and Ma Quaile — but we had our hardships and our struggles — all part of the theatrical game, whether stage or screen or “talkie.” But you must always remember to keep brave. Keep happy. And have faith in yourself.